Okayyyy, so I know it has been TOO LONG since I last updated this blog. But, good news – I have good excuses 😉

My main purpose for this blog is promoting and sharing the Team #77 Racing (mainly the girls’) journey racing their quads, dirt bikes, 3 wheelers, and BMX. As I am sure you could imagine, racing is SO EXPENSIVE. Over time, we hope that documenting this journey will allow the girls’ to secure additional sponsors and fans along the way, keeping a strong support system around them at all times. They both have BIG goals in mind – but how exactly we get there is another story.

With that being said, since BMX State Finals at PI (in late August), we haven’t been moto’ing at all. Lame, I know! Following finals, we took a quick trip over to Idaho for a few days to visit with my sister. The day after we returned, both girls were back to school full time. Two weeks following that, I went back to work full time. And now, we are still just as busy as ever!

BUT…it’s that time of the year again for the NW Flat Track Series out at Monroe. Team #77 Racing has been racing out at Monroe Flat Track since 1990, so this is pretty much a family tradition at this point. This year is a 9 round series, spread between 4 months. Sunday mornings, we arrive to the track by 8am, and we don’t leave until well into the evening. Half way through the season – a double point’s race takes place in Pasco, WA. The last two races of the season are run as a double header (Friday night, and Saturday afternoon). You must race 8 of 9 races to qualify – and it’s ran total points style (each finish equals a certain amount of points, add them all up at the end of the year for a total and final points count/finish).

This year, Penelope will be racing her PW50 dirt bike in the Beginners 50cc Class and her LT80 quad in the 90cc Beginners Quad Class.

Maybelline, on the other hand, we are not sure what classes she will be racing at this point. She will be on her new KTM Pro Senior 50cc dirt bike, and racing her LT80 quad again. Although both the quad and dirt bike beginners’ classes allow for kids up to 11 years old to race in them, it really isn’t fair to remain as a beginner if you’ve been racing that class several years, and you have taken away a podium finish. On the other hand, the next class up for quads is usually ‘shifter’ quads (which Maybelline’s isn’t), and then next class up for dirt bikes were some REALLY tough boys on some REALLY ‘trick’ dirt bikes.

As we get nearer to the season start, gossip sure is flowing! We recently found out (after spending a small fortune to build some race 3-wheelers) that the promoter has canceled the 3-wheeler class for this season. HUGE slap in the face to many people, but I honestly expect nothing different from this class-act of a guy. Another one of the podium finishers in the girls’ dirt bike class will also be stepping up to a ‘big girl’ bike this year and racing alongside Maybelline. Our sweetest buddy AJ (#99) will be returning for another year of Flat Track (his 2nd year) on his quad. The most adorable lil’ Zoe and her tough brother will be missing in this years’ dirt bike classes. Maybelline’s biggest competition in the quad class last year is moving up. So many changes – makes for lots of anticipation…we can’t wait!

Oh my, what a long week it has been! I tend to be one who plans and prepares for everything. But when things come up unexpectedly, I easily get stressed trying to juggle it all. Anyhow, the week is FINALLY over – and I am extremely happy to have a weekend at home with no plans in sight.

This last week was the first week of swim lessons – and the girls LOVED IT. Both of them swim rather well, but with all the fishing and other water activities we do – it makes me feel a whole heck of a lot better knowing that they have the basic skill-set needed if any emergencies were to arise. Not to mention that I can’t swim (well, barely) – so they would need to save me, LOL. Anyhow, the weather was crummy all week, and lessons were in an outdoor pool, but neither of the girls even seemed to notice. We will be headed back Monday for week #2! 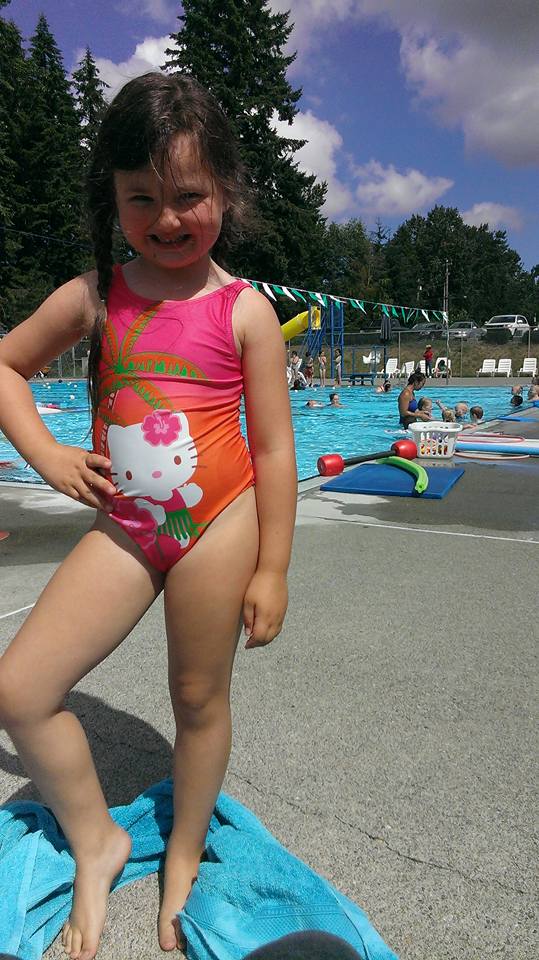 On Tuesday, Penelope’s ‘adopted dog’ Shyanne (Grandpa’s retired hunting dog) got hit by a car, and broke a foot, a leg, and has a severe laceration on her one leg. Tough lesson for a 5 year old! Nelly had thrown her ball across the street, and Shyanne took off to retrieve it. A work van speeding around the corner tagged her (right in front of Penelope). Penelope has spent most the week nursing Shyanne’s wounds, and doing her best to help her recover. Sure breaks my heart for both of them! 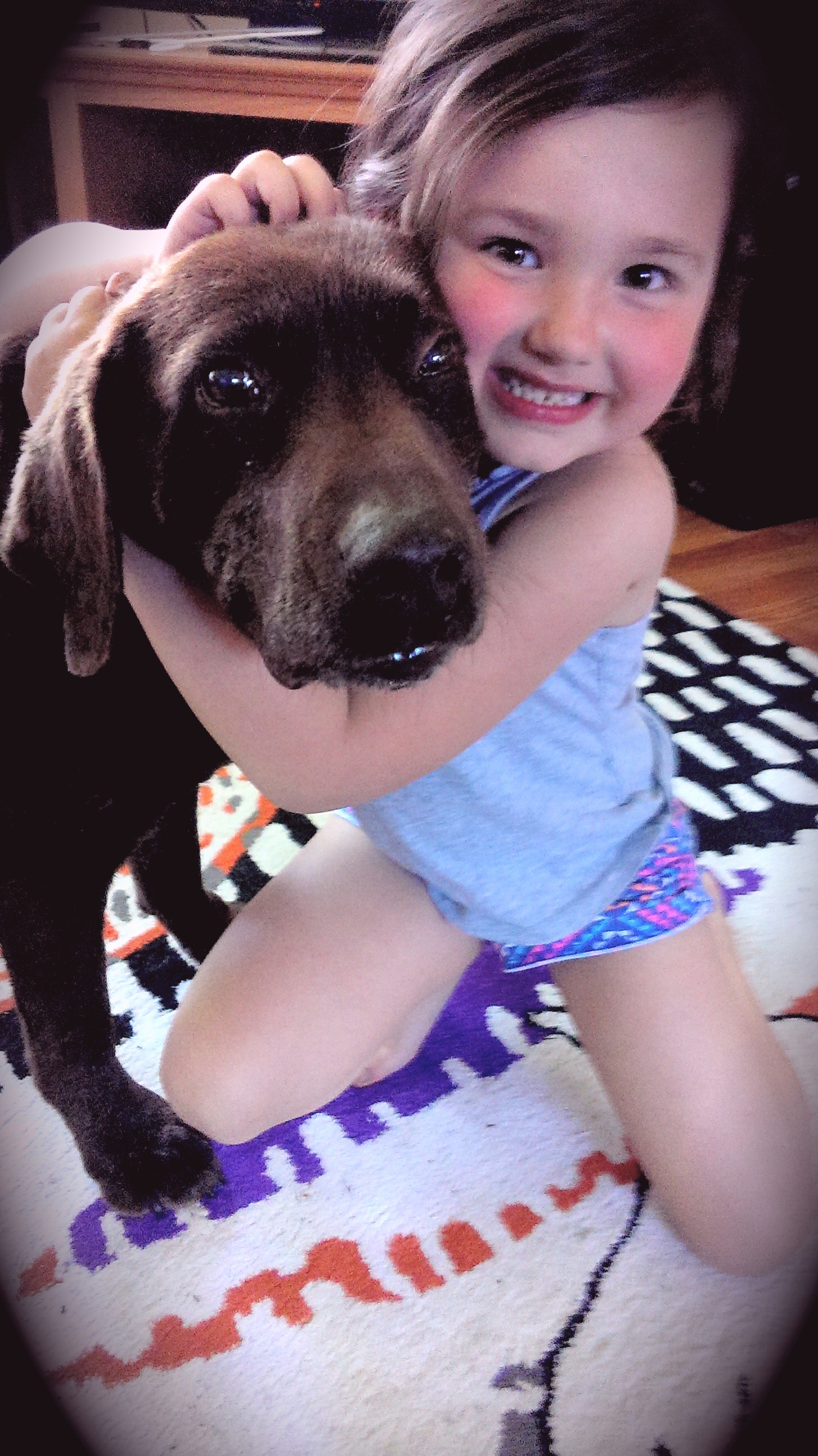 On Thursday, Maybelline and I headed out to meet Poppa Wheelie at EMXP for some practice on her new KTM Pro Senior. Although she has ‘talked the talk’ for many month about this KTM – she is actually pretty scared of it. It’s by far the fastest thing she has ever ridden! It took some coaxing and several laps before she became completely comfortable with it – but in no time, she was rippin’ it up. After an hour or two, she decided she wanted to go hit the big track. Ummm, we weren’t quite sure about it – but let her do her thing. Within the first lap, she was ‘rider-down’ between a jump and the tabletop. By the time she rode up to us after the crash, she was balling her eyes out. Come to find out, she wasn’t actually so hurt (a small bruise and scratch) – she was just so upset because the guy who helped her on the track never asked her if she was ok. He just picked up her bike, started it, and told her to go. Well now, lesson learned for Maybelline: If you are going to ride the ‘big-boy’ track on your ‘big-girl’ bike, then there ain’t no time for crying over crashes, LOL. She quickly exited that track, went back to the kids track, and finished off her evening doing practice laps there. 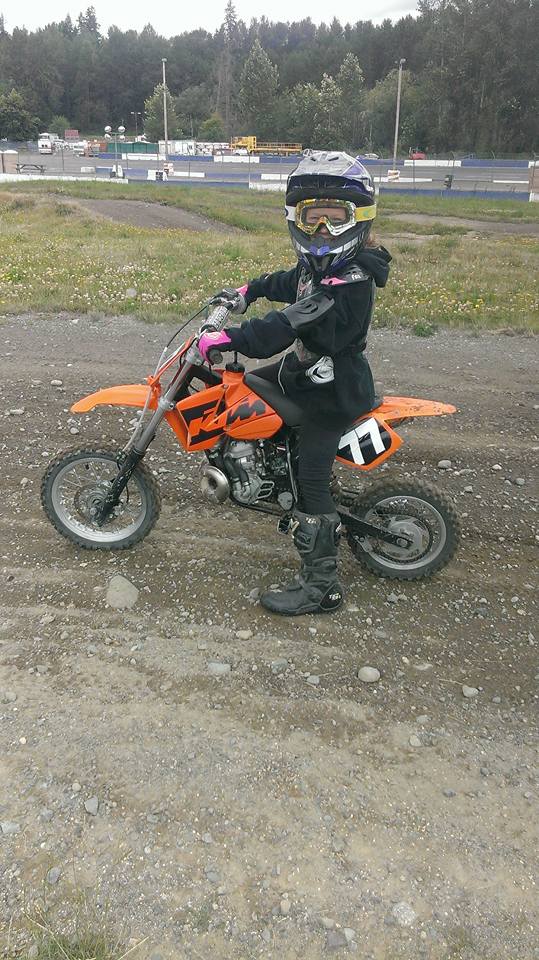 Yesterday (Friday), after finishing swim lessons, Maybelline and I headed off to SeaTac Airport for her first solo flight (headed to Boise for bonding time with her Auntie Chandra). What a task that was! 5 hours later (between Friday traffic through Seattle, parking at SeaTac, unoccupied minor check-in and paperwork, security, dinner, etc), she was finally in the air. Ironically, as I pulled in the driveway at home – I got a text that she had just landed, and was safe with her auntie. 5 hours’ worth of work, for her 50 minute flight, LOL. 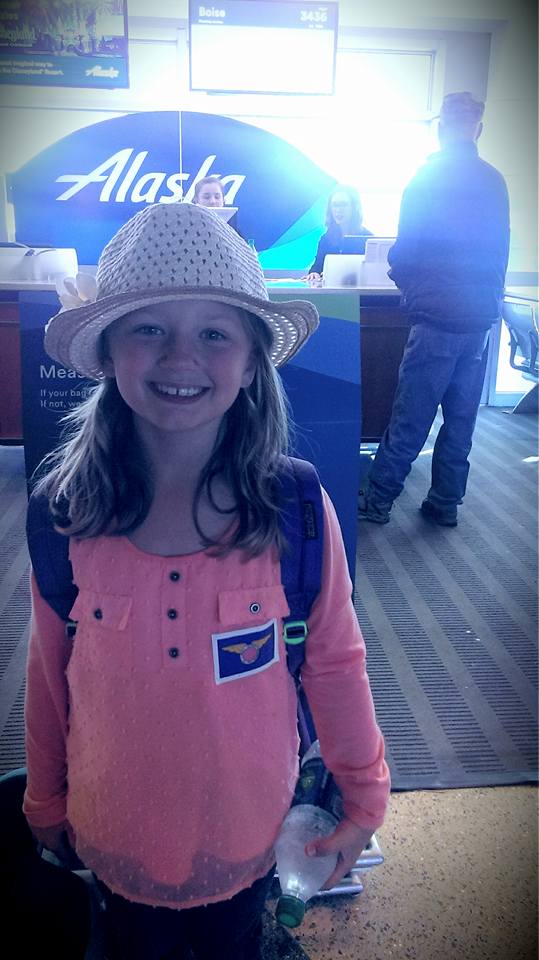 This morning, I slept in – and it felt sooooooo good. As I slowly woke up, got some coffee, and checked my phone – I found this gem: 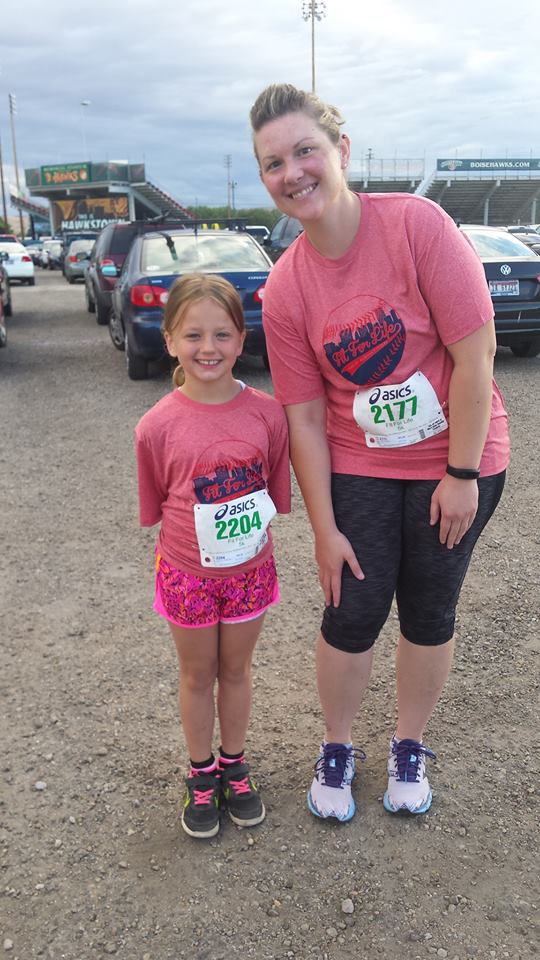 Maybelline and her auntie completed May’s first 5k in 43 minutes! So proud of these ladies♥♥♥

Now, I am off to get a pork roast and some ribs in the smoker! Somehow, my husband convinced me to ‘buy a whole pig’ (in which we had no freezer room for anyhow). So, mission ‘SMOKE PORK’ is in session…